The Final Countdown – Promised in the Beginning

We have looked at how mankind fell from their first created state. The Bible tells us God had a plan based on a Promise made at the beginning of history.

The Bible – Really a Library

First, some facts about the Bible.  The Bible is a collection of books, written by many authors.  It took more than 1500 years for these books to all be written from start to finish.  This makes the Bible  more like a library and sets it apart from other Great Books. If the Bible was written by just one author, or a group that knew each other we may not be surprised at its unity, but the authors of the Bible are separated by hundreds and even thousands of years.  These writers come from different countries, languages, and social positions.  But their messages and predictions connect with each other and the facts of history recorded outside the Bible.  The oldest copies of the Old Testament books (the books before Jesus) that still exist today are from 200 BC.  Existing copies of the New Testament are dated from 125 AD and later.

The Gospel Promise in the Garden

We see at the very beginning of the Bible an example of how the Bible predicts into the future. Though it is about the Beginning, it was written with the End in mind.  Here we see a Promise when God confronts Satan (who was in the form of a serpent) with a riddle just after he brought about the Fall of mankind.

“… and I (God) will put enmity between you (Satan) and the woman and between your offspring and hers. He will crush your head and you will strike his heel.” (Genesis 3:15)

You can see that this is prophetic by ‘will’s in future tense.  There are also five different characters mentioned. They are:

The Promise predicts how these characters will relate in the future. This is shown below: 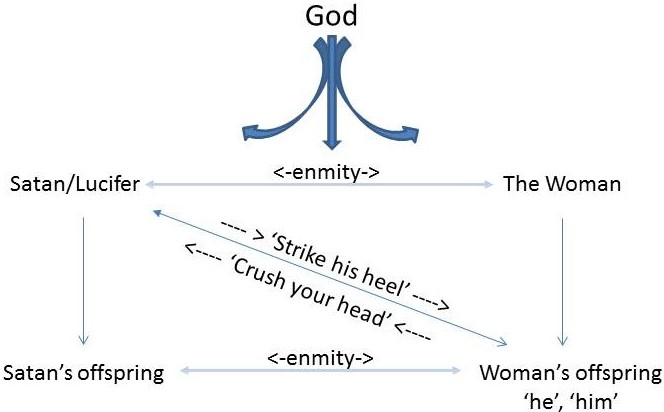 Relationships between the characters in the Promise

Notice what is not said. God does not say that this offspring will come from the woman and the man, but only from the woman. This is especially unusual since the Bible almost always records only the sons coming through fathers.  Some see the Bible as ‘sexist’  because it just records fathers of sons. But here it is different – there is no promise of an offspring (a ‘he’) coming from a man. It says only that there will be an offspring coming from the woman, without mentioning a man.

A much later Prophet builds on that Promise

the Lord himself will give you the sign. Look! The virgin will conceive a child! She will give birth to a son and will call him Immanuel (which means ‘God is with us’). (Isaiah 7:14, 750 BC)

More than 700 years after Isaiah, Jesus was born (the New Testament says) from a virgin – fulfilling Isaiah. But is Jesus being foreseen even this early – right at the beginning of human history? This fits with the offspring as a ‘he’, not a ‘she’, ‘they’ or ‘it’. With that perspective, if you read the riddle it makes sense.

But what does it mean that Satan would strike ‘his heel’? One year I worked in the jungles of Cameroon. We had to wear thick rubber boots in the humid heat because the snakes lay in the long grass and would strike your foot – your heel – and kill you.  After that jungle experience it made sense to me.  The ‘he’ would destroy Satan, the serpent, but ‘he’ would be killed in the process.  That does foreshadow the victory gained through the sacrifice of Jesus.

‘The woman’ – a Double Meaning

So, if this Promise at the Beginning concerns Jesus, then the woman would be the virgin woman who gave birth to him – Mary.  But there is a second meaning.  Notice how another Old Testament prophet refers to Israel.

Israel, in the Bible, is referred to as the wife of the LORD – a woman.  Then, the last book in the Bible, describes a conflict which this woman will have to go through with her enemy

I saw a woman clothed with … a crown of twelve stars on her head. She was pregnant, and she cried out because of her labor pains and the agony of giving birth.

Then …I saw a large red dragon … in front of the woman as she was about to give birth, ready to devour her baby as soon as it was born.

She gave birth to a son who was to rule all nations with an iron rod. …

This great dragon—the ancient serpent called the devil, or Satan, the one deceiving the whole world—was thrown down to the earth with all his angels…

When the dragon realized that he had been thrown down to the earth, he pursued the woman who had given birth to the male child… And the dragon was angry at the woman and declared war against the rest of her children…  (Revelation 12:1-17, 90 AD)


Since Jesus was a Jew, he is at the same time the offspring of Mary, the woman, and Israel, the woman.  The Promise came true both ways.  The ancient serpent is in enmity with Israel, ‘the woman’, and has declared war on her.  This explains the unique troubles that Jews have suffered through their long history, and it was predicted in the very beginning.

The offspring of the Serpent?

But who is this offspring of Satan?  In the last book of the Bible, many pages and thousands of years after the Promise in Genesis, predicts a coming person. Note the description:

8 The beast you saw was once alive, but now it is not. However, it will come up out of the bottomless pit and go away to be destroyed. The people who live on the earth will be amazed when they see the beast, because it was once alive, is no longer living, but will come again. These are the people whose names have never been written in the book of life since the beginning of the world.

“You need wisdom to understand this.

This describes a fight between the offspring of the woman and Satan’s offspring. But it is first revealed in the Promise of Genesis, at the very beginning of the Bible, with the details filled in later. The countdown to a final contest between Satan and God started long ago in the Garden.  It could almost make you think that history is really His-Story.